We’re at the Mall! 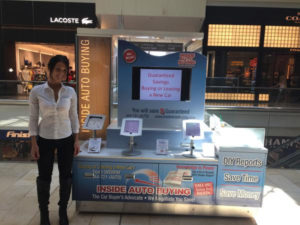 Are you in the Paramus, NJ area? If so, stop by the Westfield Garden State Plaza and say Hi to Brianna or talk cars with Andrew! We’re next to Coach and Apple Store on the 2nd floor. We look forward to seeing you!

Everyone always ask when is the best time to get a new car? In the last 2-3 years it seems the end of each quarter (March, June, September & December) is the best time. The bulk of the money that dealerships get from the manufacturer are based on them hitting their quarterly objectives. Many of the dealers reach this in the final days of the quarter. I’ve seen many dealers “truly” lose up to $7,000 on a car if it meant making their numbers.

Now is the time! Even if you think you have the right deal, spend the $97 on the DIY Report to see what your leaving on the table. You have “Zero” to lose and can only save money with this service. If I’m not saving you money I’ll give you the $97 back.

Acura – Dealers are over flowing with TLX’s and Acura Financial is looking to move them with offering BIG incentives! RDX & MDX are also very aggressive this month with Bonus Cash being offered.

Audi – They have released the all-new 2018 Q5 & A5 Sportback and both actually have good programs if you’re able to find the right deal! This is not the norm for Audi, as they usually don’t offer decent programs when a model is redesigned. The 2017 A8L 4.0T this month is also a great value compared to the BMW 7 series and Mercedes S550. A4 & A6 programs are still going strong and the Q7’s are better than they have been.

BMW – There is a BIG push for deals to hit their quarterly objective and the bonus programs started last month to qualify for this month’s $1,000 Stair Step program. BMW is adding more and more companies to their Corporate Sales Program. Be sure to check with your HR department to see if your company has been added to the list! This would save you an additional $1,500 on most vehicles plus a lower interest rate on a lease. It makes about a $65 per month difference on a lease above and beyond whatever you’re able to negotiate and other incentives being offered.

Buick – Enclave & Envision programs are good since inventory is a bit high.

Cadillac – Cadillac is giving extra money but only on certain Vin #’s – mostly aged units. If you can find these vehicles (I can) the deals are definitely worth it!! Most GM lease customers within the last 4 months of their lease are probably on the “Manifest List” to get out 3-4 months early. Call 1-800-950-2438 to confirm you qualify.

Chevy – They are also targeting certain vehicles and “Customers, you may not even know it” – Check to see if you’re on Manifest List!

Chrysler – The Pacifica is very aggressive on leases and purchases. The Chrysler 300 is a tremendous value at the current lease programs. It’s a lot of car for the money and a great ride.

Ram – Dodge Ram leases are still going strong. Not as good as they were last month but still a great value!

Honda – The all-new CRV has just come out with a good lease program since its redesign a few months ago! The Civic Hatchback and sedan are always a great value and the Accord came out with some additional incentives known as “Flex Cash” making it $40+ cheaper on a lease than its been in the past few months which was already a great deal.

Infiniti – Q50 still going strong! I find the QX60 to be a very good value this month when you don’t go over board on the options. Once you get over a $54,000 MSRP I think there are other vehicles to consider of better quality and value.

Jeep – The Jeep Grand Cherokee “Limited” is at an all-time low. I haven’t seen a lease deal like this since 2011 when Jeep offered the Laredo X-Package. The Wrangler Unlimited has been creeping up in price during the last 2-3 months as the nicer weather is coming but still a great value.

Mercedes – The C300, E300 and GLE350 have good programs. The GLS450’s have been getting lower and lower every month since the start of the year.

Toyota – I still think Highlander is probably the best bang for the buck when it comes to 7 passenger and you stick with the ‘XLE” trim level!

Lexus – Finally the RX350 is back to the lease numbers where I say go out and grab one! I don’t mean it wasn’t worth getting in previous months but I have a set number in my head where I say at this dollar amount it’s a no-brainer! There is “Moving Up” money on the IS and NX models that gives Infiniti a lot of competition. The LX570 has a very strong lease program and for a $100K SUV you wouldn’t believe what the best deal would bring this down to.

Range Rover – I have to say I really hate negotiating these cars because the dealers think they are doing you a favor by selling you one. In the last 2-3 years they have had a lock on selling all these full size RR’s and RR Sports at crazy numbers. On average I’ve been about $175 less per month than what most customers where getting offered. Now I have a lock on these so be sure to check with me before you get one!