You need to hear “NO”

How do you know when you’re getting the best deal? It’s simple; if you shop 10 dealers you should be hearing the word “No” by at least 8 of them! Whenever I’m hired for a deal, I do my due diligence to come up with the price I feel I should be able to get (no, its not a number I pick out of the sky like most people do – there is a formula to it -LOL!). Then I start going through the dealers until I get that price. Many, many times I am told it does not sell for that price; we would be losing money; it’s not going to happen; I get hung up on; walked away from or just don’t even get a reply. But this one deal I did 2 days ago still has me in shock.

I was hired to get a 2013 Jaguar XF for a guy coming out of a 2010 Jaguar XF. He received a price of $795 per month on his own and while currently paying $912 on his 2010 it seemed like a decent deal. I figured the car should have been about $700 per month. I start shopping and as normal hear prices between $840 and $750 as I ask for $700 per month. Keep getting told if you got $750 that’s the best your going to get and just take it. As I contacted the 11th dealer and after b*llshi***ng for 20 minutes the salesman says I am going to give you one price, its not negotiable and you can either take it or leave it. He comes back at $595! Of course I ask the obvious, are taxes, bank fee, etc. included? Yes to all… does it have wheels and an engine?!?!? Can I see the window sticker? Saw it and it’s the car I was looking for, so I make the deal, cover all the bases and button everything up.

What does buttoning everything up mean? Get a Buyer’s Order, with your name as it appears on your license with the address you’ll be using for the registration. Make sure the correct Vin# is listed, make, model, options, terms of the deal (lease mileage, term, total due at signing with a breakdown of the due at signing), delivery date and most important make sure it’s signed by the Manager and then you sign it. Without a signature it’s worthless. Trust me this came back to bite me in the ass one time. Will never make that mistake again!

Two days ago, it was delivery day and the customer is set to pick up at 3pm. Around 11am I decided to stretch my legs a bit and take a ride to White Plains Jaguar as I have never been in an XF and like to stay up to date on all cars. I enter the showroom and while showing interest on a similar car they have on the floor and it being the so -called, “Last day of the month, best day to buy” the salesman says I am going to make you an offer you can’t refuse.

I said, “I got better and I’ll give you one more shot.”

“I still have better”…

He tells me either I am lying or someone is lying to me and I’ll never get that car for that price. I show my phone with the Buyer’s Order and copy of the window sticker. He now runs to the Manager. Then they both come back. The Manager starts out by saying I understand someone misquoted me on a car and he wants to sell me a real car at a real price. Then after 20 minutes of him swearing I

‘ll never get it for that price, all dealers pay the same amount and that’s a major loser even after all the holdback

When it doesn’t work out and they try something, come back to us please don’t feel embarrassed.

I leave there even questioning myself. Is this deal really going to go through??

I called the customer to give him a heads up to call me if they try anything on pick up because it’s a much better deal than I was anticipating.

The customer shows up, looks at the car first, all good! Then heads in to do the paper work with the Business Manager where they really tried to pressure him into

buying multiple aftersales items for 30 minutes but he stood his ground and walked out with the car! They definitely thought they would make up the profit they lost on the back end.

Moral of the story… It doesn’t matter how many people tell you no, someone will say yes!

Congratulations to Dennis D. on his new Jaguar XF! 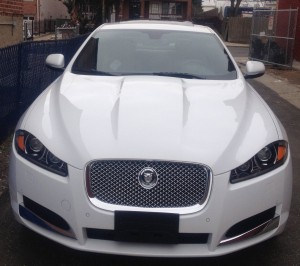